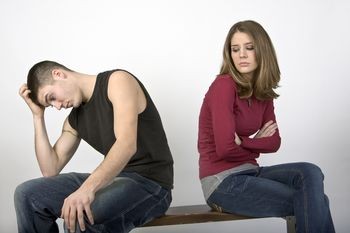 Scientists were shocked on Wednesday to find that not a single person in the entire school even remotely cared about the breakup of high school juniors Max Brown and Tracy Weinstein.

The couple, who had been engaging in a tumultuous on-again, off-again relationship ever since hooking up at Sam Schneider’s pool party a few weeks prior, apparently surprised no one with their dramatic announcement during homeroom that they had decided to see other people.

Dr. Joshua Feldman, lead researcher in the study, said he had never before seen such low levels of interest demonstrated by high schoolers.  “These students have somehow even managed to pay more attention to the lessons in their 8am geometry class than they have to Tracy and Max’s relationship,” he reported.  “Literally no one–not even their best friends–cares about the breakup.”

This revelation is especially remarkable given the fact that Sam Schneider’s pool party has been one of the most talked-about events in Ashton High’s recent history.

“Sam’s party was totally cool,” Dr. Feldman said.  “His parents were out of town, so there was no adult supervision, and some of the guys on the lacrosse team brought a 30 rack, so… it got pretty crazy.”

The party, which the researcher described as “a real bonding moment for the class,” was graced by the presences of such popular kids as Ali Stockton and Chad Jensen.

“Everyone knows they’re supposed to be together,” gushed Dr. Feldman.  “They’re so perfect for each other.  They’re, like, soul mates.”

Though the two didn’t end up sealing the deal that night, the doctor is hopeful that Jensen will ask Stockton on a date in the near future.  “This might be weird or whatever,” he said, “but I actually totally respect Chad for respecting Ali and taking it slow, if that makes sense.”

Dr. Feldman claimed that compared to Ali and Chad, the Max/Tracy drama was a complete “snooze cruise.”  “I’m sorry, but they’re not even hot,” he said.  Realizing that the subjects of his report were likely to read this article, the doctor amended, “I mean, like, no offense or anything.”

2692 Comments on Study: Literally No One Cares About Max and Tracy’s Breakup